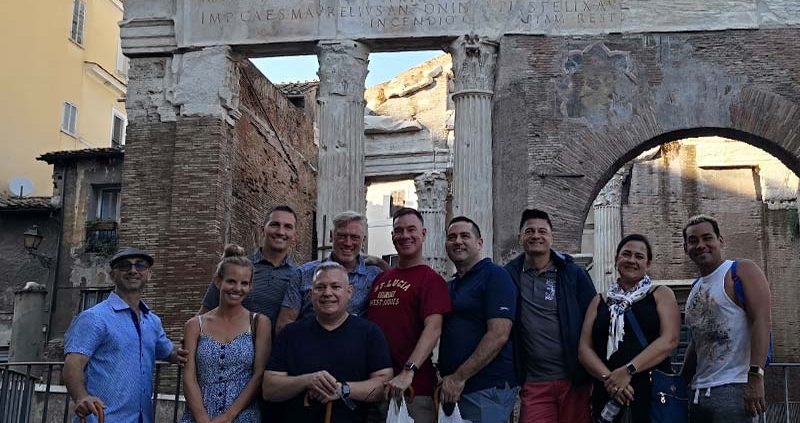 Are you in Rome? Have you heard about the Jewish Ghetto, and would you like to visit it? Here you are a selection of things to do when there and a list of the Jewish Ghetto best restaurants.

The Jewish Ghetto: a little bit of history

The Roman Jewish Ghetto was established as a result of Papal Bull Cum nimis absurdum, promulgated by Pope Paul IV on 14 July 1555. The Jewish ghetto was a walled quarter with its gates locked at night. The gates were added as the ghetto was successively enlarged. Initially, there were two gates in the wall, the number increased to three in the 16th century, under Sixtus V to five, and finally, during the 19th century to eight. The gates were opened at dawn and closed every night. The area of Rome chosen for the ghetto was one of the most undesirable quarters of the city, subject to constant flooding by the Tiber River. At the time of its construction, in the Jewish ghetto, there was no fresh water. However, some years later the Popes built several fountains in the district. One fountain, designed by Giacomo della Porta, was to be placed in the Piazza Giudea, the site of a market, inside the ghetto, but Muzio Mattei used his influence to have the fountain, the Fontana delle Tartarughe (Turtle Fountain) located in Piazza Mattei, in front of his residence, where it still is.
The Papal bull ceased to exist on 20 September 1870 when Rome was incorporated in the Kingdom of Italy. With this, the requirement that Jews live in the Ghetto came to an end. The ghetto walls were torn down in 1888 and the Jewish ghetto was almost completely demolished. On the resulting area, the new Synagogue of Rome and apartment buildings were erected.
The Roman Jewish Ghetto was the last remaining ghetto in Western Europe until ghettos were reintroduced by Nazi Germany in the 1930s.
Despite its not so happy history, this district is today a bustling and fancy neighborhood, very famous for food and restaurants, but the highlights of this area are the synagogue, built-in 1905, with its Jewish museum and the Jewish high school.

The best period to come to visit the Jewish Ghetto is between March and May and in October and November. The area is not too crowded, all the restaurants have tables outside, so you can enjoy the great day or evening in this wonderful district, very close to the river.
The best day to come to visit the Jewish Ghetto is during the week, remember that this is still a Jewish area, so almost all the shops and restaurants will be closed on Friday evening and all Saturday, because of the Shabbat. If you are not interested in food or shops, than you should definitely go visit the Jewish ghetto on Saturday, so you can admire the wonderful and typical characteristics of the area and the ruins of the Portico d’Ottavia, in a complete silence and without cars or scooters to ruin the atmosphere, because during the weekends it becomes a pedestrian area.

First of all, you should know that all the restaurants, pizzerie and shops of the Roman Jewish ghetto are kosher places. Kashrut is the list of the rules that Jewish people follow when they prepare their meals. You won’t find a restaurant that uses both milk (or cheeses) and meat in the same place. The kosher foods are the ground of the Roman cuisine and of 80% of the roman recipes and traditions that we have today.
Now, whether you like salty food or sweet food, in this area you can find everything. At the corner of Piazza delle Cinque Scole, there’s one of the most famous pastry shops in Rome, they’re so famous they don’t need names or signs. If you can reach the shop before they finish everything, you will taste some terrific Jewish pastries and cakes.
If you prefer salty food, then, well, you have just to choose. In the Jewish ghetto you can find Supplì, Carciofi alla Giudia (fried artichokes), Fiori di Zucca (fried zucchini flowers) and so on; if you don’t want to sit in a restaurant and have a former meal, but just eat something as a snack, fried things are a specialty of this area, prepared following very old and particular Roman and Jewish traditions and recipes.

Where to eat: the best restaurants in the Jewish Ghetto

Today the Jewish ghetto of Rome is one of the most famous areas for food and restaurants, and that’s why we chose this area as one of the highlights of our Food Crawl Tour, a funny walking tour of Rome where you can learn everything about Jewish food and good Jewish restaurants. If you want to have a break and to eat something while you walk around the area, you can try some pizza or some fried things at Franco e Cristina, a small place in Via del Portico d’Ottavia (they’re famous for artichokes and zucchini flowers), while if you want to have dinner or lunch you can go to the famous Nonna Betta e il Giardino Romano, a restaurant where Anthony Bourdain had dinner and wrote a review on; or another very typical ristorante (restaurant) of this area is Giggetto, a lovely family business place, which is opened since 1923.
Two more less touristic restaurants are Sora Margherita (Piazza delle Cinque Scole 30) and Al Pompiere (Via di Santa Maria de Calderari 38).
Please remember that almost all the restaurants and shops in this area will be closed every Friday evening and Saturday because of the Shabbat (from the sunset of Friday till the sunset of Saturday).

How to reach it

This area is situated in a very central part of Rome, on the east coast of the river Tevere. You can reach the area with the tram bus n.8 or you can easily walk from Largo Argentina, where you can get with a very lot of buses from different areas of Rome.